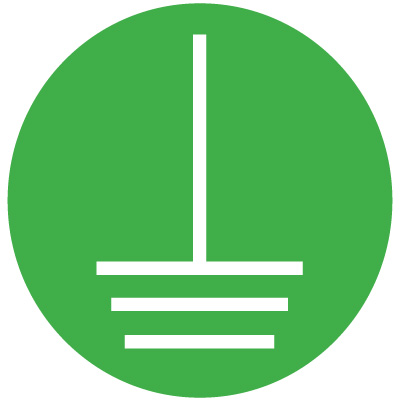 If you are having an alteration of addition made to your electrical installation, your electrician must check (as well as other things) that the earthing and bonding arrangements you have are up to the required standard.
This is because the safety of any new work you have done (however small) will depend on the earthing and bonding arrangements.
What is earthing?
If there is a fault in your electrical installation you could get an electric shock if you touch a live metal part. This is because the electricity may use your body as a path from the live part to the earth part.
Earthing is used to protect you from an electric shock. It does this by providing a path (a protective conductor) for a fault current to flow to earth. It also causes the protective device (either a circuit-breaker or fuse) to switch off the electric current to the circuit that has the fault.
For example, if a cooker has a fault, the fault current flows to earth through the protective (earthing) conductors. A protective device (fuse or circuit-breaker) in the consumer unit switches off the electrical supply to the cooker. The cooker is now safe from causing an electric shock to anyone who touches it.
What is bonding?
Bonding is used to reduce the risk of electric shocks to anyone who may touch two separate metal parts when there is a fault somewhere in the supply of electrical installation. By connecting bonding conductors between particular parts, it reduces the voltage there might have been.
The types of bonding generally used are main bonding and supplementary bonding.
More advice
An electrician will give you advice if your earthing or bonding needs to be improved for safety reasons.
We strongly recommend that you use an electrician registered with a government approved scheme to carry out any electrical installation work you need doing.
Definitions
If you require more advice or would like a free quotation please contact us:
#earth #earthing #bonding #electrical #electricalsafety #electricshock #potentialdifference

Do you need any help?